The Charles Tyrwhitt Sale is On!

Save up to 60% off men's and women's shirts, suits, shoes and casual wear at Charles Tyrwhitt. Shop Now!

Farfur, the terrorist version of Mickey Mouse, is dead.

The final episode that aired on Friday depicted Farfur’s demise at the hands of an actor portraying an Israeli.

“Farfur was martyred while defending his land,” the Associated Press quoted Sara, the teen presenter, as saying, adding that the perpetrators were "the killers of children."

If this is how Palestinians do Sesame Street, I would hate to see their version of The Electric Company. I just do not get those Rozerem commercials.

This guy has trouble sleeping... so he imagines he is playing chess with Abraham Lincoln and a talking gopher (prolly the one that tormented Bill Murray in that golfing movie).

Is that what he dreams about?

Too bad the Rozerem people did not ask me to do a commercial based on my dreams.

I would be playing chess with Halle Berry and Paris Hilton.

On March 10th of this year, one of the funniest men on the planet committed suicide.

Richard John Colangelo... known and loved by millions as Richard Jeni, left us at the far-too-young age of 49.

The coroner’s report mentioned that Rich was “involuntarily hospitalized” on December 28th following a bout with suicidal depression, stating his desire to jump off of a building.

According to his family, Rich was diagnosed with “severe clinical depression coupled with bouts of psychotic paranoia.”

It is sad to know that Rich suffered so much... and that it came to such a sad ending.

He will be missed...
No comments:

I was reading in The Wall Street Journal that HBO spent $10 million dollars...

The superstar of cable has lost its strongest series... Sopranos, Sex and the City and others have gone off the air. The ingenious Deadwood was prematurely canceled despite the uproar from fans. Its new series are getting a lukewarm reception, at best.

So what does HBO do?

It spends ten million clams on previews for a phony show that does not exist! Wouldn’t the money be better spent putting Deadwood back into production?
No comments:

Email ThisBlogThis!Share to TwitterShare to FacebookShare to Pinterest
Labels: HBO, Rest in Peace 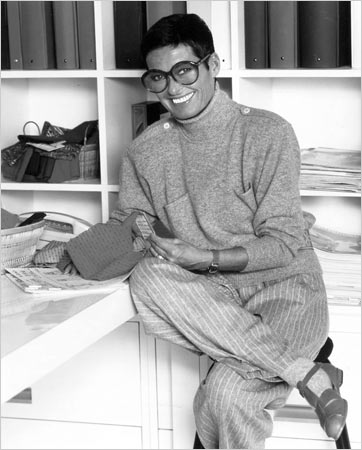 Liz Claiborne, a pioneer in the male-dominated world of fashion, died Tuesday in NYC at the age of 78.

Claiborne designed the clothing that many professional women made standard in the workplace during the liberation period of the 1970’s.

May she rest in peace.
No comments:

Email ThisBlogThis!Share to TwitterShare to FacebookShare to Pinterest
Labels: fashion, Rest in Peace

A Rift in the Space Time Continuum

Well she was told it would only be 23 days with good behavior. But, was her behavior really good?

Maybe there was a rift in the space time continuum where it seemed like...

Remember the posting about the terrorist Mickey Mouse clone teaching children the glories of suicide bombing missions? It would appear that this is more than just rhetoric.

It was reported on CNN, The Guardian, and at Hot Air that the Taliban is using children as young as the age of six as suicide bombers.

If that weren’t enough... there is a video on YouTube showing a 14-year-old that had an explosive vest strapped to his chest for the purpose of a suicide bombing attack.
Fortunately, the teenager cut the vest off and aborted the mission.

What’s next, babies with explosive diapers?

This has got to stop!
No comments:

After the slam-bam-doozie of Spiderman 3 comes another satisfying romp from the Marvel Universe.

The rise of the silver surfer was a fun picture to watch... while cramming nachos, hot dogs and butterfingers into my mouth (hey, I went all day without eating).

It was also nice to have a near-empty theatre to sit in (pays to have a four-day work week) without kids screaming or kicking the back of our seats.

If you want fun and special effects... then go see the #1 movie in America.
1 comment:

I saw these in a news group and had to share...

It was mealtime during a flight on Hooters Airline. “Would you like dinner?” the flight attendant asked John, seated in front. “What are my choices?” John asked. “Yes or no,” she replied.

A flight attendant was stationed at the departure gate to check tickets. As a man approached, she extended her hand for the ticket and he opened his trench coat and flashed her. Without missing a beat, she said, “Sir, I need to see your ticket not your stub.”

A lady was picking through the frozen turkeys at the grocery store but she couldn’t find one big enough for her family. She asked a stock boy, “Do these turkeys get any bigger?” The stock boy replied, “No ma’am, they’re dead.”

The cop got out of his car and the kid who was stopped for speeding rolled down his window. “I’ve been waiting for you all day,” the cop said. The kid replied, “Yeah, well I got here as fast as I could.” When the cop finally stopped laughing, he sent the kid on his way without a ticket.

A truck driver was driving along on the freeway. A sign comes up that reads, “Low Bridge Ahead.” Before he knows it, the bridge is right ahead of him and he gets stuck under the bridge. Cars are backed up for miles. Finally, a police car comes up. The cop gets out of his car and walks to the truck driver, puts his hands on his hips and says, “Got stuck, huh?” The truck driver says, “No, I was delivering this bridge and ran out of gas.”

A college teacher reminds her class of tomorrow’s final exam. “Now class, I won’t tolerate any excuses for you not being here tomorrow. I might consider a nuclear attack, a serious personal injury, illness, or a death in your immediate family, but that’s it, no other excuses whatsoever!” A smart-ass guy in the back of the room raised his hand and asked, “What would you say if tomorrow I said I was suffering from complete and utter sexual exhaustion?” The entire class is reduced to laughter and snickering. When silence is restored, the teacher smiles knowingly at the student, shakes her head and sweetly says, “Well, I guess you’d have to write the exam with your other hand.”

NBC’s Jeff Zucker, according to the Los Angeles Times, is going to pay Paris Hilton

One Million Dollars
For an interview when she gets out of jail.

If you drive drunk and go to jail, you get a million dollars?

Can anybody get that deal?

Now, let’s see... where did I leave my Jack Daniels?