Iran’s Pro-Israel Show is a Hit 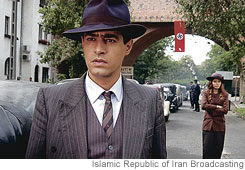 I saw an article in today’s Wall Street Journal about Iran’s unlikely TV hit, an hour-long drama with elaborate 1940’s era costumes and European locations. It is the most expensive program ever aired by Iranian Channel One.

The most surprising thing about this show, however, is that it is a sympathetic retelling of the experience of the Jews during World War II.

That’s right, the country whose president, Mahmoud Ahmadinejad, called for the extermination of Israel and declared that the Holocaust was a myth, produces a love story between an Iranian-Palestinian Muslim man and a French Jewish woman. A story that is currently the most popular show on Iranian television.

Part of the rationale is that Iranians see a distinction between Jewish people and the Government of Israel (which it believes to be a racist state). That explains the existence of roughly 25,000 Jews in Iran -- one of whom is a member of the Iranian Parliament.

You can watch “Zero Degree Turn” on-line at: