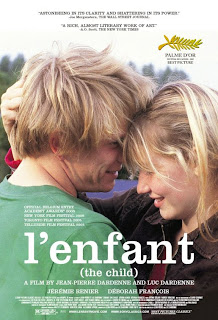 Typically, I don’t like foreign films with subtitles. They require more attention than I prefer to give. You have to concentrate on ignoring (or trying to decipher) the dialogue while reading and watching action. Blurrrrrr, too much!

The Child (L‘Enfant in its original language) is a definite exception to that rule.

It starts out with the story of two young (and immature) people who are in love. No, that’s not right...

It starts out with the story of a girl too young to know that she has hooked herself up with the biggest loser to walk on two legs. Yeah, that’s better.

The fool makes bungle after bungle and eventually does something so egregious that it changes both their lives... and the life of their enfant... in ways that I won’t spoil.

This film is currently playing on Starz Cinema and available for purchase and/or rental from Sony Classics. Highly recommended!