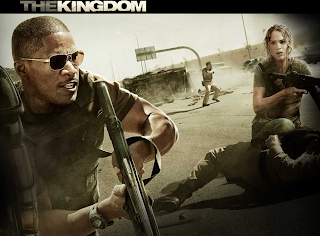 After watching Stealth, I thought maybe Jaime Foxx was on a downhill slide.

Now that I’ve seen him in action in the new hit movie “The Kingdom,” I realized Jaime is still on top of his game. He carries this film effortlessly... with help from a great supporting cast.

Well, Jennifer Garner did seem to be sleepwalking through her role... but we give Mrs. Affleck (that’s Ben... not the insurance company) points for some fine emoting during choice scenes.

Jason Bateman was an interesting (but workable) choice in casting. Once I spotted him, I fully expected to laugh. Well, I wasn’t disappointed... but his kidnap scene had me on the edge of my seat...

The film has a haunting ending, which I won’t spoil for you... but it makes us realize how this whole terrorism thing started and (sadly) how it refuses to end...

You have a really great blog here, I've bookmarked it
Thanks