The United States of Unity 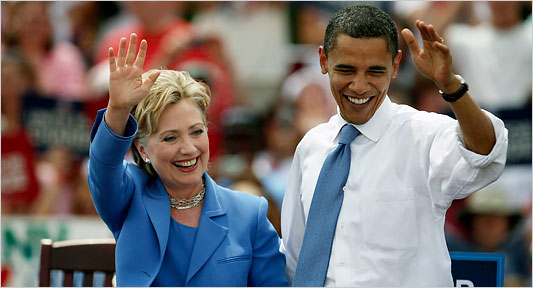 The New York Times and other news media has portrayed the grand appearance of Barack Obama and Hillary Clinton side by side in a town called Unity. It was certainly a moment of positive energy as 6,000 Democrats cheered at the idea of Barack Obama winning the White House.

Unfortunately, there is a faction of former Hillary supporters, as The Washington Post reports, who aren’t feeling that unity vibe. In fact, they seem to be mad as he**, and not willing to take it any more... This wave of dissent is headed by former Clinton backers who have blogs and web sites expressing their view of this season as a summer of discontent.

One of the key leaders in this “Hill Yes, O No” movement is Diane Mantouvalos (pictured on the right). These women feel that they will not vote for Obama.

Some will join John McCain and his quest for the 100-year war.

Others plan to write in Hillary Clinton on the ballots during the general election.

I just hope their chads don’t get dimpled. J