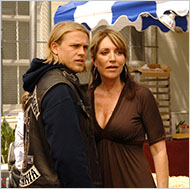 Actress Katey Sagal rose to fame as the delightfully tacky Peggy Bundy in the show that put the Fox network on the map, Married With Children. Later, she voiced our favorite one-eyed cartoon character (after Popeye, anyway) on Futurama. Now, Katey gets to join Michael Chiklis as a bad-ass cable drama star.

In a new series “Sons of Anarchy” on the bad-ass FX network, Katey plays the bad-ass mother of the leader of a bad-ass motorcycle gang. Ron “Hellboy” Perlman portrays her bad-ass husband.

Should be worth a look-see.

Check out the article from The New York Times.