A Blast From the Past

Just When You Thought It Was Safe To Surf The Internet...

If you watched Sunday night’s CBS 60 Minutes, you will notice that a new viral threat has appeared. Conficker, according to PC World, is infecting tens of thousands of computers a day.

Let’s be careful out there...

The arrival of spring means the arrival of hot fashions. Even if you don’t feel good, you can always look good. Here are a few ideas for looking real good!

Our friend Jeff Gund from Infolist gives us the latest and greatest news on opportunities in the entertainment business. Here is one that I thought I should pass along. Enjoy!

Here’s a great opportunity for single women - “Holidate” on ABC takes you on a vacation getaway specifically designed to help you find the love of your life!

As always, feel free to forward if you know someone that would be interested, and be sure to mention I sent you for priority consideration!

Good luck, and have a great day!

CASTING SINGLE WOMEN FOR NEW SHOW ON ABC
"HOLIDATE" TAKES YOU ON A VACATION TO HELP YOU FIND LOVE!

ABC MEDIA PRODUCTIONS is NOW CASTING SINGLE WOMEN who are LOOKING FOR LOVE - "anywhere but here!!!"

We are searching NATIONWIDE!

Are you a woman age 25 to 40 who is successful in every aspect of life except one...finding love?

You’re climbing your way up the corporate ladder, have your own boutique business, or manage a hip new start-up company. You just put a down payment on your own condo by the beach, bought that trendy loft downtown, or maybe even splurged to upgrade to that shiny convertible you’ve been eyeing. You play as hard as you work…from the health club to the nightclubs. You’re cute, sexy; maybe even drop dead gorgeous!

Yep, you’ve got it all...everything except the right guy to share it with.

If you believe there is love out there for you, now is the time to throw caution to the wind. This is your chance to jump into a different life in a different part of the country. A romantic holiday completely planned and organized just for you. We provide the new city, the new digs, the new guys… even the plane ticket.

You just have to believe in love…and get on board!

When I hear the name David Mamet, the word that comes to mind is genius.

After four years away from motion pictures, he returned with a vengeance with the martial arts film Redbelt.

Mamet had previously focused his talents on his CBS series “The Unit” and you will recognize a couple cast members from that show in this film.

However, the fine ensemble cast are the icing on a cake that provides a plot that twists and turns to unexpected but intriguing story lines... leading to a thrilling but unexpected conclusion.

Chiwetel Ejiofor plays a jujitsu instructor who barely makes ends meet. His Brazilian wife, whose family promotes fights, wants to see him in the ring making money, but to him competition desecrates the honor of the martial art. We later meet Tim Allen as an action movie star befriends Chiwetel’s character, gives him a gift, offers him work on his newest film, and offers his wife a lucrative business opportunity. It all looks great... until it turns out that it is not.

That is the basic storyline... but we, of course, had to leave out some of the exciting plot twists that make this movie edge-of-your-seat viewing. And it looks even better in BlueRay!

Add Redbelt to your list of must see movies!

Christina Ricci as a blue-blood heiress with a pig’s snout on her face?

That is the idea behind the motion picture Penelope, a modern-day fairy tale with a bit of a twist.

Also, if you are a fan of Peter Dinklage... then this is (in our humble opinion) one of his best performances.

Then... there is the surprise appearance by Reese Witherspoon that you will absolutely love!

Most people, when they hear the name Snow White, they think of the classic Disney cartoon with the cute dwarves... or, perhaps, they think of the live action remake, Snow White: The Fairest of Them All. You might even think of Olympic figure skater Carol Heiss in Snow White and the Three Stooges. But, have you seen the horror fantasy telling of this story with Signorney Weaver and Sam Neill?

Snow White: A Tale of Terror is a film that takes the original Grimm Brothers’ story of a young woman who is disliked by her stepmother to a thrilling new level. And, it does it better than one might have imagined.

Check this film out!

Reminds me of a conversation with a friend who was throwing away her son’s comics.

I told her that a comic I treasured, “Lois Lane: Super Brain,” was valued at nearly $50,000... but that my mother threw it away... effectively throwing tens of thousands of dollars away.

She shrugged and threw out her son’s comics, anyway.

Maybe that is why they are so valuable... mothers have the uncontrollable need to throw them away.

Maybe we need a government-sponsored study of this strange behavior.

We were saddened to read in Variety that the awesome actor has exited the planet at the age of 62. He will be missed.

Shocking, but not surprising, that AIG... the proverbial straw that broke the world’s economic backbone and was awarded $170-billion in taxpayer money, is giving its executives $165-million in bonuses. 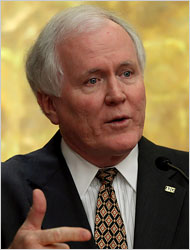 Pictured above is Edward M. Liddy, the government-appointed chairman of A.I.G. Liddy argued that paying bonuses helps A.I.G. to keep the most skilled executives.

Read the full story at The New York Times.

When I was a kid, game shows were huge. Like, “The Price is Right” or “Wheel of Fortune.” And everyone I knew dreamed of an opportunity to stand on the set with Alex or Vanna or one of those personalities and answer the big question that would have us driving home in a brand new car… or going on vacation to some exotic locale.

Well… a lot of people enter other sweepstakes… like the Publisher’s Clearinghouse. The idea is to win big bucks by playing. But now that we are in the 21st Century… there is a modern method of playing to win big bucks.

There is a web site that sponsors contests that you can participate in using your cell phone. Yep, that’s right! Just by sending text messages you can win great prizes such as:

Right now, you can go on-line and play the cell phone sweepstakes atSMSnia.com!

The widow of Rat Pack member Sammy Davis Jr. has exited the planet at the age of 65.

She is survived by her son, Manny.
No comments:

Showtime had it right when they green-lighted the dark comedy “Dead Like Me.”

Dead Like Me was the penultimate dark comedy featured the story of a slacker teen who gets killed by a piece of space junk that reenters earth’s atmosphere. Now among the undead walking the earth, she is drafted to join the ranks of reapers whose job involves reaping the souls of those whose number has come up.

Okay, so it is a very dark comedy. A dark, dark comedy with lots of laughs from an ensemble of characters that have great chemistry.

And what a great cast. Fresh from Dolores Claiborne, you had Ellen Muth alongside veteran players Mandy Patinkin, Callum Blue, Rebecca Gayheart, and other great actors who create amusing and memorable characters.

But alas, the powers that be at Showtime killed this great show after two seasons... and despite an on-line petition signed by thousands of fans.

But the show didn’t stay dead forever. A made-for-home-video movie returned most of the original cast for a new and hilarious adventure.

Dead Like Me: Life After Death continues the adventures of Georgia Lass, the misanthropic college dropout, the family that tries to get their lives together after her loss, and the group of reapers who have to deal with a new boss and even crazier misadventures.

If you enjoyed the series... you will want to see Dead Like Me: Life After Death, which become the first of many follow-up movies to the late Showtime series. However, if you have never seen the series, you can also see both seasons...