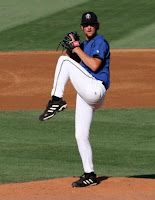 We were saddened to see the story on ESPN about the untimely death of Los Angeles Angels pitcher Nick Adenhart. He was a young man in his prime and just about to begin what promised to be a stellar career in Major League Baseball. Certainly, a shocking thing for all Angelenos and all sports fans.

It was good to hear, from The Associated Press, that a suspect has been caught and charged for this senseless death.

The 22-year-old Andrew Thomas Gallo was charged with three counts of murder as a result of causing the fatal crash by running a red light with a blood-alcohol content is estimated to be almost three times the legal limit.

Our prayers for all those who are suffering from the loss of life... and for the perpetrator and his family as well.