What You See Ain’t Always What You Get 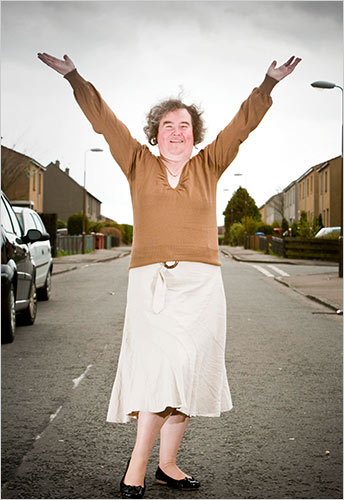 Looking more like Comedian Jonathan Winters than Shania Twain, Susan Boyle seemed unlikely to become a big star. You have probably seen the YouTube Video where Susan transformed a smirking crowd of incredulous onlookers into believers who gave her a standing ovation.

Even Simon Cowell, on the show that he successfully brought across the pond as American Idol, had to smile at the enormity of this woman’s vocal talents.

Susan’s surprising performance was discussed in an article in today’s New York Times Magazine that explains why people make snap judgments about how others look. Even more surprising... they state that there is a good reason why those snap judgments are made!

People are stereotyped because of their gender... their ethnicity... their good looks... or, their lack thereof. But who would have thought that there is a logical reason behind pre-judgments?

Meanwhile, you can read another New York Times article about Susan Boyle’s meteoric rise to fame.

Still, it is good to be kind to folks and now show your pre-judgement.  A poker face is a good thing to master!