The FDA Granted Power over Tobacco 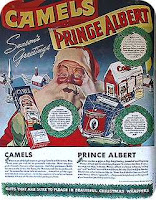 So, the business of getting people hooked on tobacco took off, and all of the big stars in Hollywood had one stuck between their lips. Even President Franklin Delano Roosevelt smoked with an upper-crusty cigarette holder.

Heck, look at Santa Claus in this 1940’s advertisement. And, before television advertising of tobacco was outlawed, even Fred Flintstone smoked Winstons.

Back in the day, the Surgeon General declared that cigarettes could cause cancer, emphysema... and other maladies. So why hasn’t tobacco gone the way of cocaine, heroin, and other drugs? Because of big bucks.

Things have taken a bit of a turn today, with the Senate voting overwhelmingly to impose federal regulation on cigarettes and other forms of tobacco. But does that mean that you won’t get your Kools or your Newports? Check out the article in the New York Times and come to your own conclusion.