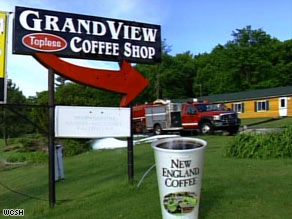 This is one of those Believe it or Not stories...

In New England, where the Puritans first set foot upon American soil, there is actually a topless coffee shop. That is... a coffee shop with baristas who wear nothing. Well, nothing above the waist.

There was such a place. It ain’t no more. It apparently has burned to the ground.

If you saw the story on CNN (which obviously did not include any topless footage), you would have been as amazed as I at the existence of the GrandView (pun probably well intended) coffee shop... erm, I mean... topless coffee shop... in Vassalboro, Maine.

But all good (and bad) things must come to an end... and who knows whether it was arson or some act of Providence (pun not intended) that this topless coffee shop burned down... never to sell another cup (pun intended).