Rich Mullins was an awesome artist... and with pounding percussion by Philadelphia’s native son Chris McHugh, this song is a favorite. Theology with a heart. Check out this video of Rich in action.

Before He Was Ralph Kramden...

Before he became famous as Ralph Kramden... and apparently before he became fat, Jackie Gleason starred in the 1940’s television series The Life of Riley. Obviously a low budget production with a lone whistler doing the theme song (even Andy Griffith had a guitar, another whistler in harmony, and finger snaps) -- this show is an interesting look at television long before we were born. Check out this episode below: 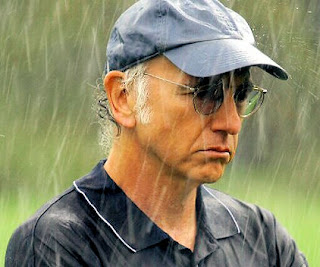 I am a huge Larry David fan... the man is a comic genius.  And the fact that this season of his HBO comedy features a Seinfeld reunion as a running subplot had me on the edge of my seat.

But, in the last episode... Larry thought it would be a funny gag to urinate on a painting representing Jesus.

Sad to say... Curb Your Enthusiasm is no longer on my Tivo season pass list.  It is fresh, inventive and hilariously funny... and with the Seinfeld subplot, historic.  But Larry, you just went too far for me.

Still love you, though...

Real life married couple Richard Benjamin and Paula Prentiss starred together in a CBS television series in the late 1960’s. Take a peek at a promo for this short-lived comedy:

This is a preview of all the brand new series coming on CBS...

Travel back in time to see some stars you will recognize... including Ronald Reagan doing a comedy twist, Gomer Pyle’s Sgt. Carter as a knife wielding inmate, Rod Serling doing his Twilight Zone preview, and Carol Burnett doing a belly dance in a Genie costume.  Check it out below:

In the 1950’s, there was no CGI or other sophisticated special effects. You get that watching this pilot for a sci-fi series that blew up faster than the time bomb that Tobor... well, let me not spoil the plot for you.

Milton Supman, a Tarheel known and beloved by millions as the pie-throwing comic Soupy Sales has exited the planet.

He was infamous for his many comedic bits... including asking kids at home to take money out of their mothers’ purses and mailing it to him.

Tons of cash arrived.  The FCC blew a gasket.

Read more about this great comic... born to a Jewish family that sold sheets to the Ku Klux Klan... in Variety.

And the next time you hit someone in the face with a whipped cream pie... remember Soupy.

Time Out for Ginger

Long before the invention of Ritalin, there was a loud, hyperactive teenage girl who loves her dad so much, she knocks him down and smothers him with kisses. And, child protective services... well, they didn’t exist then.

Candy Moore takes on the role that helped make Patty Duke a star... and it turned out to be a turkey that never made it to television. But, thanks to the internet... you can see this monumental flop of 1962... featuring the typical sitcom family with the Wicked Witch of the West as their maid.

After watching the video below, drop us a comment to let us know how many times (and with what implement) you think this girl should have been slapped...

Since Bob Denver’s post-Gilligan show “The Good Guys” crashed and burned, he went back to formula. Dusty’s Trails was a clone of Gilligan’s Island with the sarge from F Troop in the Skipper role and two girls from Petticoat Junction in the Ginger and Mary-Ann roles. The video below is one of the 26 episodes that were inflicted upon the television audience.

New Yorker (Brooklyn Born) Vic Mizzy, one of the most inventive composers and musicians in show business, has exited the planet.

Vic did music for dozens of television series, including:
He also scored movies and wrote mountains of songs.  He was a virtuoso. And, he was a kind fellow... who was nice enough to reply to an e-mail we sent him many moons ago.

This genius will be missed.  Read his obituary a Variety.

Joan Davis duked it out with Lucille Ball in the golden years of television... and of course I Love Lucy starring Lucy and Desi is an enduring classic while I Married Joan with Jim Backus... well... that show did have its following. But this pilot, appearing in the video control below, never made it past the starting gate. Shame, really...

This was the pilot for a 1954 television series that crashed and burned. It reminds me of another favorite from before my time, It’s A Great Life! Well, except for the two Steppin Fetchit characters.Check this out and let us know if you think it could have been a potential TV Land classic.

The Moe, Larry and Shemp Show

The Three Stooges were the kings of the short subject motion picture... but this ABC television pilot crashed and burned faster than Moe could slap Larry and Shemp. Check out the video below:

A woman was waiting for a train. She had her baby in a stroller. She took her hand off the stroller and was distracted for a moment. The stroller rolled off the platform and onto the tracks and was hit by the oncoming train.

Check out the video below:

Fortunately, the baby survived with only minor injuries. The mother needs to be hung up by her toes and horse whipped.

Before Garry Shandling did the talk-show within a show... there was a pilot about a sitcom within a sitcom. Daddy-O, put together by the team that created the classic Dobie Gillis, was created in 1961 and was way ahead of its time. It had pedigreed creators and cast. Why did it fail?

Check out the video below... and leave a comment with your ideas...

Dancing on the Ceiling

CBS thought this show would be the biggest hit... starring Bob (Gilligan) Denver and Herb (Um... That Bald Guy?) Edelman with Joyce Van Patten. It turned out to be a rotten egg. Who’da thunk it? Check out the promo from 1960-something...

Straight from the flop house, Little Amy was a CBS television pilot that crashed and burned and (until now) never saw the light of day. Even with co-stars like a very young Jack Nicholson (as the Coach) and Jack Albertson (as a reporter)... two Jacks and the pilot was flushed (get it?)

Check out the episode below:

Where The Action Is

Before Dick Clark was known for American Bandstand, there was this almost forgotten show called WHERE THE ACTION IS. It had a hip happening opening... lots of perfectly coiffed teens watching singers lip-synch... and commercials that are downright frightening. Take a look at an episode from this show:

The video below features rare color footage of Moe, Larry and Curley Joe. If laughter is like medicine... this gives you a bit of wellness. And be sure to keep an eye out for perennial stooge foil Emil Sitka! 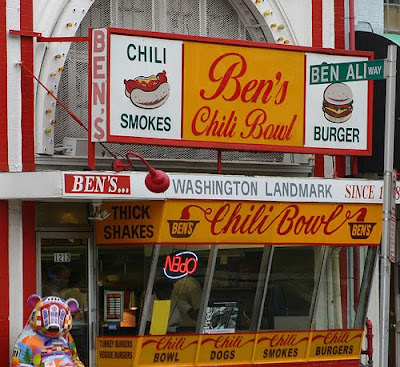 This restaurant, a Washington DC landmark since the 1950’s, is famous not only for its classic fare but for its famous clientèle, which includes:
Okay, so maybe I am not in the same league as the aforementioned, but everyone that hears the name of this joint experience simultaneous widening of the eyes and watering of the mouth.

Of course, I made sure to pop some chitosan, glucomannan, psyllium, oat bran, apple pectin, Vitamin C, and a Lipitor® tablet when I saw the chef take the french fry basket and shake the grease from the fries onto the half-smokes.


It made me think of another favorite eatery, Dyers in Memphis. They are famous for deep-fried cheeseburgers... using the same grease (recycled, natch) that the founder used when the original restaurant opened roughly a century ago. Yum!


I enjoyed the chili half-smoke with onions and mustard... and the chili cheese fries. Sadly, the milkshake machine was busted. It saved me from deciding whether I wanted a vanilla, strawberry, chocolate, banana, or pineapple flavored shake.

And now, I will begin my diet of bran flakes and Omega 6’s...


My hometown paper, The Philadelphia Inquirer, did a tribute to Mr. Ali... calling the half-smoke the District’s answer to the Philly Cheesesteak.

It is more than an answer... especially the way it is done at Ben’s. He will be missed... but his legacy will continue!

From the Inside Out

I love this Australian band. A lot of great musicians and singers all singing for the One Who Lives on the inside.

The Honeymoon is Obviously Over...

My friend Charlie Peacock did a nice jazzy interpretation of this song with vocals by Ladysmith Black Mambazo. Still, the original stands on its own as a classic. With God, all things are possible. I think many of us are seeing this... the presence of bones dug up in Africa notwithstanding...

Some are wondering how Rio de Janiero could be chosen to host the Olympics over Chicago... the home of Ed Debeviks and deep dish pizza. Well, perhaps this video might help clear up the motivations behind the Olympics Committee’s selection: