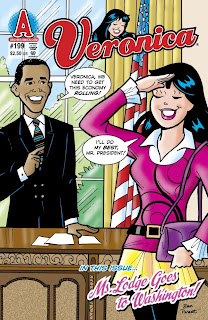 Back in the 1960’s and 70’s, all Saturday Morning cartoons featured music.  There was Fat Albert and his Junkyard Band... the Banana Splits... etcetera.

This trend seems to have started with the animated versions of the Archie Comics characters.  The song “Sugar Sugar” went from Saturday morning TV to the pop charts.

This song was originally written for the Monkees. Can you imagine Davy Jones singing the verse?

Legend had it that Mike Nesmith (the musical purist of the group) threw a fit over this song and refused to perform it.  This may have been the  harbinger of the end of the Monkees.

But the Monkees loss was the Archies gain.

Years later, Archie and the gang went to Washington DC to help Barack Obama.  How did that work out?  Buy the comic, fool!