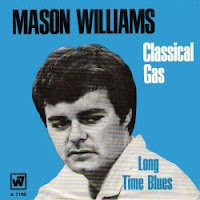 Mason Williams hit the scene in the 1960’s as the head writer for the Smothers Brothers Comedy Hour... the show that the CBS censors loved to hate.

Despite Williams’s penchant for comedy, he was was more famous for his composition Classical Gas, a song which went on to receive three Emmy® Awards.

Here is Mason in the original performance of this song, demonstrating his virtuosity on the guitar: