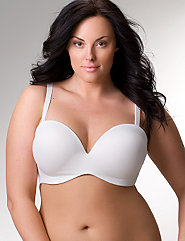 The bone thin models of Victoria’s Secret are featured on television commercials at all hours of the day and evening... but surprisingly the plump zaftig models of Lane Bryant have been banned from television in a number of markets. So much for the saying that real women have curves.

Check out this video from the CBS Early Show: