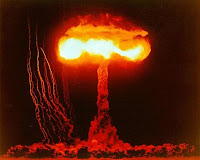 An interesting animation that shows all of the nuclear explosions on earth... historically.

Let us just hope that this is the end of those events...

Check out the animation in the widget below!

The View on Obama on The View

So following President Obama’s appearance on the ABC talk show The View, there was a great deal of media uproar -- mostly from Fox News, but also from Rosie O’Donnell and Sarah Palin.

Obama’s appearance was considered by some pundits as undignified (even more so than former President Bush’s appearance on Dr. Phil).

Even worse, Fox tells us, Obama missed a meeting with the Boy Scouts of America in order to do the show.

You can read details of the historic broadcast at The Los Angeles Times.

Naturally, a bearded Jon Stewart had to give his tongue-in-cheek play on the entire situation -- you can view Stewart’s routine in the video widget below:

She would be Halle Burton.

If you have ever wondered what television was like when the cigarette companies sponsored programming... take a look at the Ed Wynn (who?) show from 1950.

Having seen friends and relatives die from lung cancer after a lifetime of smoking, it doesn’t require a Ph.D. in rocket science to figure out this is a dangerous addiction. Still, youngsters can’t seem to wait to get old enough to smoke. In fact, some don’t wait. I remember smoking a puff in the boys room in school trying to be cool.

Well, the manufacturers of what my parents referred to as “Cancer Sticks” are trying to get them in even younger. This trend involves the marketing of flavored cigarettes such as “Twista Lime” and “Mocha Taboo” with candy, fruit and alcohol flavors. Many pudits are convinced that these brands are marketed to underaged smokers.

The R.J. Reynolds company has agreed to stop selling these products domestically. Unfortunately, you kids overseas are... in the colloquial vernacular... S.O.L.

Okay, I get it. Everything old has to be remade, right?

Well... the past few months we have brought to your attention a lot of old shows and pilots that coulda... woulda... shoulda...

Well... it did work for Scooby Doo. Sort of.

Check out the first trailer for this film in the video widget below:

I am Through With White Girls

When I saw the title, I’m Through With White Girls, I had no idea what I would be into...

Not only is it a film that some people can, ahem, relate to... but it has a great cast of recognizable faces (including a couple blasts from the past). Bottom line... this film is Laugh Out Loud funny.

And... where else can you see a group of people dance hip-hop style to the British hit Safety Dance?


After years of dating white women, an unconventional “brotha” (Anthony Montgomery) vows to try his luck with some “sistahs” of his own race. But when he falls for a self-described “half-Rican Canadian” (Lia Johnson), is it possible he’s found his soul mate? True, she isn’t black -- but her race is only part of the problem. For this longtime commitment-phobe to settle down, he’ll have to drastically change his ways.

I’m Through With White Girls is a great romantic comedy that you should add to your home video collection.

One of my favorite character actors from back in the day was Bob Cummings.
More youthful than Dick Clark in his heyday, Cummings was perhaps the father of the romantic comedy bachelors.
His old television series, Love That Bob, was the tale of a swinging bachelor who photographed beautiful fashion models. Or, as IMDB puts it:


The romantic misadventures of Bob Collins, a suave, sophisticated bachelor and photographer operating in Hollywood, California. The show centers around his womanizing ways with his models, and his sister’s attempts to make him settle down.

In addition to perennial character actress Rosemary DeCamp, who portrayed Bob’s sister, his co-stars also included two actors who would later go on to on-going television fame in their own right.
One, his young protégé Chuck, would later go on to portray the eponymous role of Dobie Gillis.
The other, his wacky secretary Shultzy, would go on to portray Alice in The Brady Bunch.
If you never got to see this show... which has been ignored by both TV Land and the American Life Network, then check out these videos:
You will see a cavalcade of stars appearing in episodes of the show, including:
You might want to try to catch one of Cummings’ many wonderful movie roles... including The Devil and Miss Jones, which has been playing on the AMC Network on cable. And no, it is not a porn film... this one was a quaint romantic comedy about workers at a department store trying to get better working conditions from the curmudgeonly billionaire who owns the store.
Yep, we sure love that Bob!