Shoving Some Tunes Into My Earhole 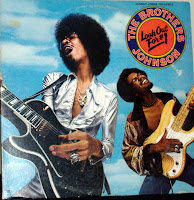 Thought I might load some of the music from my youth onto my iPod... which includes the work of George and Louis Johnson -- the Brothers Johnson.

The masters of funk (and gospel, noting Louis and Valerie Johnson’s release Passage) sound a bit dated on some of the tracks.  It is amazing how digital remastering can make one doubt their memories.

Regardless, the high quality production values that Quincy Jones imparted upon this tightly-produced funk is as crisp and tight as ever.

However, I was wondering about the cacophony of weird voices on the track “Right on Time.” It almost sounds as if they have the Muppets singing in the background.

I also added some Jazz to my playlist.  My buddy Charlie Peacock has a TIGHT jazz album that makes you want to don a beret and start sipping espresso.

Back in 2005, I had the opportunity to travel to Nashville to hear Charlie perform tracks from Love Press Ex-Curio (and, while in town, enjoy some of my Aunt Louise’s awesome cooking).  I regret not making it down there, as the CD has some of the best jazz tracks evah!

If you like tight crisp jazz like Bird and Miles used to dump, then shove some Love Press Ex-Curio into your earhole... ya dig?