Before Steve Carrel... there was Paul Lynde... 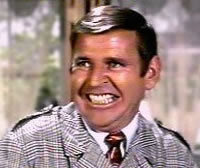 Okay boys and girls... it is time for a history lesson.

In the 1970’s, ABC saw its long-running hit, Bewitched, end its network run. William Asher, producer of that show (and about-to-become-ex husband of Elizabeth Montgomery) decided to cast a popular guest star named Paul Lynde (the original Steve Carrel) was given his own sitcom.

Asher also came up with a show for Cleavon Little, the man who replaced Richard Pryor in Blazing Saddles. I guess the studio thought Cleavon was more likeable. In the video widget below, you can see Cleavon flirting with (gasp) a white woman.

As history would go on to show us... Paul’s show crashed and burned... and Cleavon’s show was retooled in the second season, replacing James Whitmore with Paul Lynde. But since Lynde was more of a funny guy than a straight guy... Cleavon became the straight-man in the retooled series.