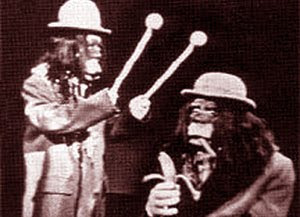 The comedy of Ernie Kovacs predates that of Monty Python, Rowan and Martins Laugh In, and anything else we have seen.

And... it was light years ahead of anything on David Sarnoff’s vast wasteland at that time.

Howwever... the Nairobi Trio comedy bit could be considered a wee bit politically incorrect. Maybe. Depends on where your sensitivities are. Anyway...

Check out the video widget below featuring a bit of classic television hilarity featuring: