The Original King of Television 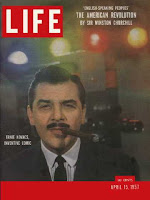 Long long ago... when television was a new curiosity that was just starting to appear in some people’s living rooms, a genius named Ernie Kovacs began doing things with this new medium called video that nobody ever dreamed of.

Now, in the 21st Century... we still have not caught up with the level of comedy that this late genius produced. If only he had lived, who knows what directions he might have gone into?

Take a look (in the video widget below) at some televised gags from long before most of us were born!