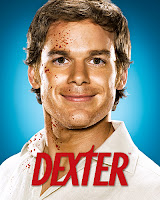 Nerds around the world were on the edges of their chairs as the trailer for the fifth season of this Showtime original series debuted on the internet.

Michael C. Hall (apparently healed from his illness) is back and better than ever -- and the drama seems to be ramped up to a high level.

Some Julie Benz fans will be sad... but she will be starring with Michael Chiklis in a new superhero fantasy drama on ABC.

Meanwhile... let’s take a look at the sneak preview for Dexter’s fifth season in the video widget below:


I am sure my former colleagues at the White House, who were all big-time Dexter fans, will be watching. I will miss discussing the show with them over fancy luncheons at The Oval Room and La Taberna del Alabardero.