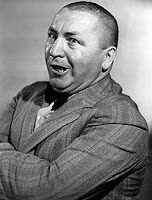 Yehudah Lev ben Shlomo Natan ha Levi, or Jerome Lester "Jerry" Horwitz to us goyim, was more famous as Curly… the most beloved of the Three Stooges.

But before he developed his act with his brother Moe and their friend (and fellow graduate of Philadelphia’s Central High School) Larry Fine… he appeared in a hokey Metro Goldwyn Mayer picture called “Roast-Beef and Movies.”

The brief clip appearing in the video widget below shows “Jerry Howard” in a bit of stooge-like slapstick with two other actors. But the best part is he is in color.