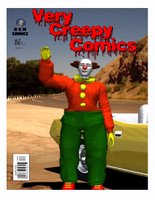 It is hard to believe that it has been over seven years since our partner in crime, the late great Don Tatro exited the planet. Don was a wise, sagacious and talented fellow who I was proud to call my friend. Don knew about Hollywood, his brother Richard having appeared in the Tribble episode of the original Star Trek.

Don was a mentor in our 3D computer graphics work, and our partner in the screenplay for a Creepy Clown film.  Sadly, the project was rejected by Fox and has sat on the shelf since Don’s sudden demise.

The image on the right was created by one of Don’s friends.  It reminds me that Creepy is too powerful a character to sit on the shelf for long. His movie WILL be made.