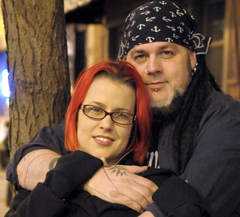 Students at Northwestern University got a little bit more than the traditional reading, writing and ’rithmetic.

Professor John Michael Bailey has an after class session that a portion of his 600 students reportedly attend.

In these after-class sessions, four members of Chicago’s fetish community expose these students to such topics as bondage, discipline, sadism and masochism.

The greatest controversy came when a 25 year old naked woman was penetrated with an implement by her fiancée (both pictured on the right).

Students were later allowed to play with… ahem… other implements.

You can read more details about this controversial exploration of higher education at The Chicago Tribune and The Naperville Sun Times.

Meanwhile, check out this video from Fox News in Boston.